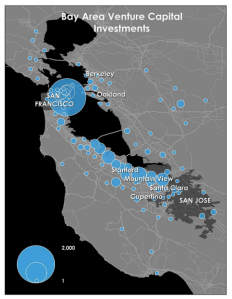 The Santa Clara Valley was some of the most valuable agricultural land in the entire world, but it was paved over to create today’s Silicon Valley. This was simply the result of bad planning and layers of leadership failure — nobody thinks farms literally needed to be destroyed to create the technology industry’s success.

Today, the tech industry is apparently on track to destroy one of the world’s most valuable cultural treasures, San Francisco, by pushing out the diverse people who have helped create it. At least that’s the story you’ve read in hundreds of articles lately. It doesn’t have to be this way. But everyone who lives in the Bay Area today needs to accept responsibility for making changes where they live so that everyone who wants to be here, can. The alternative — inaction and self-absorption — very well could create the cynical elite paradise and middle-class dystopia that many fear. I’ve spent time looking into the city’s historical housing and development policies. With the protests escalating again, I am pretty tired of seeing the city’s young and disenfranchised fight each other amid an extreme housing shortage created by 30 to 40 years of NIMBYism or (“Not-In-My-Backyard-ism”) from the old wealth of the city and down from the peninsula suburbs. Here is a very long explainer.

Sorry, this isn’t a shorter post or that I didn’t break it into 20 pieces. If you’re wondering why people are protesting you, how we got to this housing crisis, why rent control exists or why tech is even shifting to San Francisco in the first place, this is meant to provide some common points of understanding. This is a complex problem, and I’m not going to distill it into young, rich tech douchebags-versus-helpless old ladies facing eviction. There are many other places where you can read that story. It does us all no justice. 1) First off, understand the math of the region. San Francisco has a roughly thirty-five percent homeownership rate. Then 172,000 units of the city’s 376,940 housing units are under rent control. (That’s about 75 percent of the city’s rental stock.) Homeowners have a strong economic incentive to restrict supply because it supports price appreciation of their own homes. It’s understandable. Many of them have put the bulk of their net worth into their homes and they don’t want to lose that. So they engage in NIMBYism under the name of preservationism or environmentalism, even though denying in-fill development here creates pressures for sprawl elsewhere.